For the night of the first day the group slept at the Evergreen Lily Elementary School just 5 minutes away from where the expected second day’s adventure was to start. That night an unintended cultural immersion and exploration occurred between students. Through music, dance, and language exchange students socialized, building upon newly developed friendships. It was for most a fun and immersive experience and an opportunity to understand each other’s cultural identities better. Perhaps one of the most unique dimensions of the programme is this sharing opportunity that was realized to an even deeper extent during the two day trip. 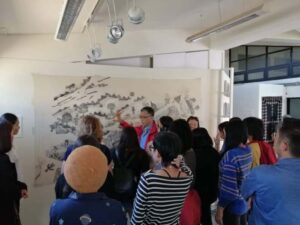 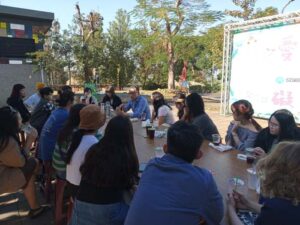 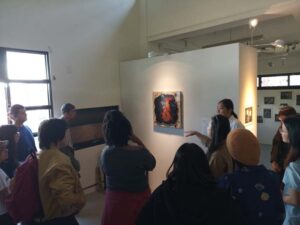 On the second day of the two day southern culture exploration students had a brief opportunity to explore and experience the landscape of Pingtung. As they took the short trek from the Elementary school they slept to the site of the day’s first lesson. For this part of the trip professor Manray Hsu for the class, “Critical Thinking and Creative Communication”, who had a family emergency on the first day joined the group.

The first stop on the day’s adventure was at the Etan Pavavalong Studio (artist website). Met by a purely artsy environment with sculptures, multi-colored tiled concrete buildings and open spaces, the students set up and had breakfast.  As the group ate a brief history of the area and it’s creative industry was explained. The 10 year old development housed 3 tribes who had been displaced after the 2009 landslide. Pavavalong Studio’s art space was one for artists to exhibit their historical identities pre and post relocation.

Being exhibited was pieces developed by four artists in residency organised by Etan Studio. These artists spent a few weeks working and researching, in and with the tribes around the area. Using mixed methods of demonstration the community’s message was portrayed from community participant drawings to interviews and videos. The shift from ancestral territory to the new development was the persistent depiction. The reconstruction that took place though it sought to embody their Cultural identities, was still unable to be the lost home. In some ways it too related to the trap concept that was depicted at the festival visited the day before in Kaohsiung. The trap of change caused by nature.

For his part of the informal lecture professor Manray opened up the discussion with anecdotal stories of his life in the art world, using his experience as a measuring point from which to contrast what happened in the indigenous village. He spoke about their history and how the Taiwanese government has worked to restore the lives of the displaced tribes trying to make their new homes and villages as close to their cultural identities as possible.

Several of the students from the class expressed interest in the residency opportunity that exists at the Etan Pavavalong Studio. The curator shared that applications would be opened at the start of next year and encouraged international students to apply.

The cultural journey continued at the Taiwan Indigenous Culture Park. There the latest exhibition “Humourous Train of Thought the Stories of Adan’s Sculpture Art” 幽默思路 – 阿旦的雕塑故事 (exhibition website) was the focus of the stop. Adan an indigenous sculptor and mastermind behind the exhibition was present to help us along the guided tour of his works. His pieces, a combination of wood and metal depicted memories from his life, childhood to present. The pieces that were exhibited each drew inspiration from humorous moments in the artist’s life or portrayed something humorous. 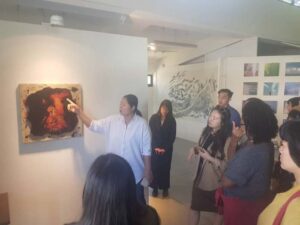 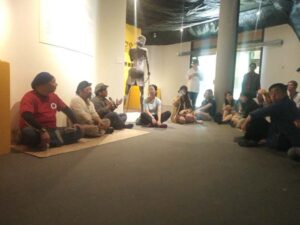 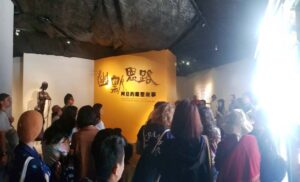 During the tour, led by his wife the stories that shaped each piece was shared. Adan, a man of few words was mostly in the background during the exhibition tour, at the end of which the group was given the opportunity to field questions about the work to the artist and his contingent (wife and family friend). The exhibition depicted the ideas of poverty, sexuality, technology, love, betrayal, family and nature. Presenting various aspects of the indigenous community through his life experiences. During the discussion questions about his artistic process, inspiration, technique and opinion on indigeneity were raised and answered.

Lunch was shared at the Indigenous park. A colourful and flavor filled buffet platter featuring an assortment of indigenous foods. The immersion and experience continued through food and fellowship.

Witnessing the Closing Ritual of the Paiwan Maleveq Festival

Entirely by chance, the Professor learnt of the Maleveq festival, celebrated once every 5 years in the Paiwan indigenous group. So the next stop on the culture tour was the “七佳部落 – Qī jiā bùluò”. Meaning 7 Best Tribes village to witness the closing ritual of the Maleveq festival.  Maleveq translates to 5-year worship and has to do with their spiritual belief and worship of ancestors. It seeks to celebrate the alliance shared between God, Spirit and man. So the 5 day long festival invites, hosts, and sends off the ancestral spirits and the ritual we witnessed is referred to as the highlight of the festival. 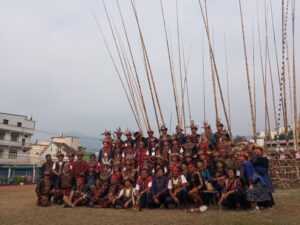 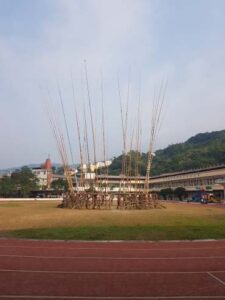 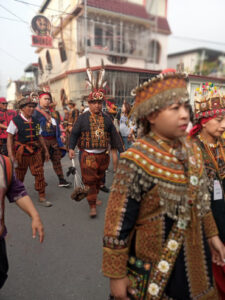 Upon arriving at the Qī jiā bùluò Village, the elementary school athletic field was already set up with doughnut shaped wooden scaffold about 4 feet high which had several 30 meter large bamboo poles leaning against it’s inside. On the sidelines were several villagers waiting for the main event to begin. From further inquiry into what was going to take place we learnt that that day was the last of the 5-day indigenous ritual. They were waiting for the witches to come back from the mountains with the ancestral spirits that they had gone to call upon. We watched the procession of around 20 warriors and their wives all dressed in traditional attire. Each having different patterns which represented their family’s pattern. They made their way onto the field and eventually ascended the scaffold taking their official positions for that part of the ritual to begin.  As each warrior took position they first sat, removed their head pieces, which was symbolic of their family’s role in the tribe embellished with feathers, animal fur, shells and other designs. After removing the head pieces they would tie a strip of cloth which was initially tied around their waist around their forehead. After each man had done this, the officiator began speaking to them and chanting.

The main activity entailed spearing “Bliss balls” made from rattan or tree bark that were thrown into the air, with the 30-meter long spares. A total of 12 balls had to be caught for this segment of the ritual to conclude. Thereafter the warriors had to come down from the scaffold, cut a piece of bamboo and race to the Chief’s house. The first to arrive was considered a hero. The clan’s warriors that were successful in spearing “Bliss balls” signified that they would be blessed during the next 5-year period.

Being present for the ritual was for many the highlight of the entire experience as 1st year IMCCI student Andrea Sandoval from Guatemala shared:

“I found the ritual Maleveq interesting because an activity like this would be very difficult for us to find on our own.”

It was a special form of cultural immersion that gave us first hand experience with the tribe’s tradition and culture.

The final stop on the journey was at the Linhousilin Forest Park in Chaojhou, Pingtung. The 1,005 Hectare large forest reserve park, is the site of 1 of 3 Green Forestation projects. As accompanying professor, I-Wen shared with students as we made our way through the park visiting the iconic art pieces that were displayed, the area of the country, being neighbour to industrialized Kaohsiung has been subject to air pollution and other negative effects of industry. The park constructs an ecosystem that features key aspects of environmental education. Through this the park envisions harmonious interaction between man and nature. Through its landscape which features a combination of water streams, contemporary art pieces mostly made from nature based materials and that works to embrace the natural environment that it shares, the park is able to serve as a land art festival exhibition.

Beyond the landscape the park reserve seeks to educate on the indigenous communities’ culture and history. One of the displays had images and explanations of the indigenous rituals including the one witnessed earlier in the day. Alongside the descriptions it also shares the future vision of the development. Which would include wildlife habitats, development of local culture and creative industries and creation of more carbon-storing resources and green networks. The relatively young project could serve as a source of inspiration for what can be done in actively to address issues of pollution using the creative industry.

The trip was many things to each participant, educational, inspiring, adventure filled, eye opening, immersive and overall fun. It gave students a unique experience and snapshot of the Southern Taiwan Cultural and Creative Industry from contemporary art to traditional expressions. It explored topics, concepts and stories shared throughout the semester in the “Critical Thinking and Creative Consumption course”. It also built upon foundations laid out in other courses in the program. Beyond that, it provided an opportunity for students in the program to experience and understand further the diverse cultural backgrounds that they all have while also developing their understanding of Taiwan’s diverse and unique Culture and Creative Industry. While it was a short trip most agreed that it was enjoyable. Elliot Cheung Hongkong Canadian 1st year IMCCI student shares:

“I enjoyed that the trip gave us an overview of the prominent art scene in the south of Taiwan. Some of my highlights include the performance as well as the traditional ritual. While we might have benefitted from an extra day just to have more breathing room and better organization, overall I was satisfied and happy that we could all build better camaraderie.”

Beyond the educational value of the experience, lifetime memories were made during the 2-day adventure. Many captured in photos, that have with the benefit of technology reached audiences from across the globe.

For most of the juniors in the program, it was the first time visiting this part of Taiwan, the short trip certainly sparked interest in a second visit to further explore and experience southern Taiwan. Whereas for most seniors, it was an opportunity to develop on the previous semester’s visit and explore further the south’s artistic history and character. The change in weather found in the south was perhaps the most welcomed feature of the trip for all.