Experiencing the Trap: Exploring Cultural and Creative Spaces In Southern Taiwan (part i)

A Two-Day Field Trip to Kaohsiung & Pingtung (part i)

Under a really nice and warm weather, first- and second-year students from IMCCI program enjoyed their last trip of the semester during a visit to different cultural places in the south of Taiwan: Kaohsiung and Pingtung. The two-days excursion on the 14th and 15th of December was an extracurricular activity of the “Critical Thinking and Creative Communication” class taught by professor Manray-Hsu and designed to develop a more critical criterion when it comes to analyzing immersive pieces of artworks as well as contemporary issues compatible to the industrialized and modernized life we are experiencing.

Compared to other trips that have also been part of some courses among the syllabus’s program, the latter was more relaxed and enjoyable. There was a jam-packed agenda to follow, but it was not fulfilled with such rigidity, consequently the flexibility in the schedule allowed students to have their own time to appreciate the exhibitions, artworks and walks that were also part of the adventure.

For this occasion, the journey started before lunch time with a visit to the Kaohsiung Museum of Fine Arts (www.kmfa.gov.tw/) KMFA –the third public arts museum in Taiwan, after the National Taiwan Museum of Fine Arts and the Taipei Fine Arts Museum–, to originally explore an exhibition called Tattoo, worked in collaboration with The musée du quai Branly, in Paris. Through a display of photography and historical records, students could get to know about the origins of tattooing and how this practice that belongs to the common heritage of most of humanity has persisted for many centuries. For a variety of countries in Asia, Europe, America, and Oceania, this artistic practice means an indelible legacy with a rich technical and significant social history, which has been thoroughly studied and represented in different cultural dimensions. Religious, commercial, political, and even magic or eccentrical purposes have been behind its functional performance giving such vast inspiration to their practitioners. 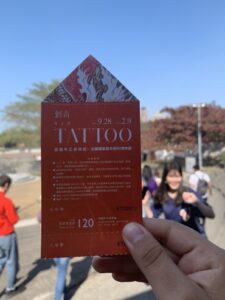 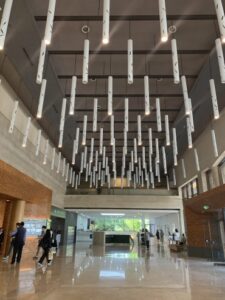 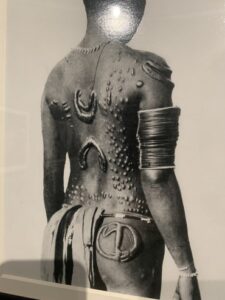 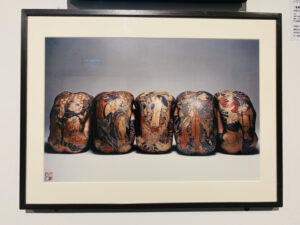 Larissa Soto, a second-year student of IMCCI who defines herself as a tattoo lover, found this exhibition very fascinating.

“As a tattoo lover and having some myself already, I got very excited about the tattoo exhibition because it gave me another perspective of this form of expression. I got the chance to know how it began in several countries around the world and how its perception has changed according to culture, religion, and other social issues. In my country tattoos are still seen as something not so good: even my parents do not like them, but I think this is a form of expression that can be performed in many ways; one of them, to tell your own personal story as indigenous tribes do. And also, it can be considered as an aesthetic method of body decoration. I can conclude that this exhibition not only reaffirmed in myself the reason why I decided to tattoo my body, but maybe will also open other people’s minds and change the wrong image they have of them.”

Thachaporn Supparatanapinyo, one of the freshman students, got impressed by the fact of knowing more about how her homeland, Thailand, is perceived from foreigners in international tattoo exhibitions.

“Everything seemed to be so informative, but so stereotypical at the same time, especially if you know the backgrounds of each country; in my case, I know about mine”,

was her feedback about the exhibition.

The students, along with Professor I-Wen Chang, managed the time to get engaged with other two immersive exhibitions such as Constructing historical pluralism from the KMFA collection South as a Place of Gathering and Yung Hsu Hsu: A World Made Light, that features the imaginative vision of this internationally recognized Taiwanese artist whose work plays with the texture of ceramic materials, using them to make large-scale sculptures that transcend the levels of thinness, clarity, and solidity. Through his artwork, the artist leads the viewer into a space where time and distance seem to be dissolved. During their exploration, some of the students took advantage of this attractive illusion to take pictures with an impressive and kind of spotless background making also of this exhibition “Instagrammable” content.

Constructing historical pluralism from the KMFA collection South as a Place of Gathering, on the other hand, provided a historic reference to understand the context in which expressionism as well as impressionism were introduced as subjective art perspectives in modern painting, drawing connections among the artists who consciously reviewed the presence of Japan’s colonial rule in 1950s. This permanent special exhibition launched on the occasion of the 25th anniversary of KMFA provides a very wide space to appreciate the paintings of artists such as Chang Chi-Hua, Liu Chi-Hsiang, Chuang Shih-Ho, and many other interested in presenting a visual memory of a territory that in the past was considered an exotic landscape, with a unique natural environment, but also a place where gatherings and multiple encounters were possible. For IMCCI students, this exhibition was a chance to revise the concept of “the South”, which is a term that not only refers to a geographical location, but examines the diverse facets of heterogeneous cultures. 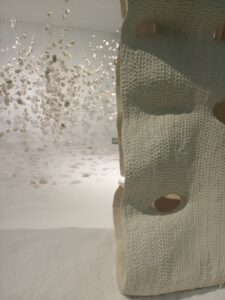 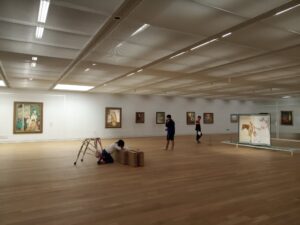 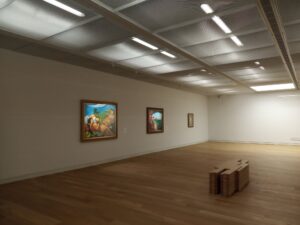 After having a picnic and resting for a while outside KMFA, students followed professor I-Wen to take a tour and see the containers installed in the vicinity of the museum. KMFA has chosen this year the hypothetical theme of “Trap” as an attempt to raise a big question about modern life and its –sometimes ignored– cultural and socio-political implications. According to the statement of the 2019 exhibition, another of the reasons to focus on the idea of “the trap” was to deepen observers’ understanding about Austronesian cultures.

The famous Taiwanese artist Sakuliu Pavavalung was invited to be part of the team that curated the art pieces. He along with other prominent artists designed a comfortable and soothing space called Place waiting for you, where visitors can access information of the performances and activities in the Festival.

Students were well-prepared to explore the variety of artworks, as the idea of “trap” had been discussed in the classroom previously. Professor Hsu, who is always plunging his students into deep reflections, suggested in advance to read a chapter of a book titled Spiderweb Anthropologies, written by Alberto Corsín Jiménez, in which we came to find out the different forms of traps (trap studied as a method of modern social theory), along with their spatial, temporal, and ontological effects. This reading helped students to have a better understating of the topics presented by the collaborators and also make thought-provoking comments on their proposals. An educational goal was achieved through this exhibition by seeing realistic several artworks that provided the viewers visual, emotional, and intellectual stimulation. 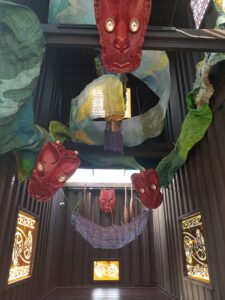 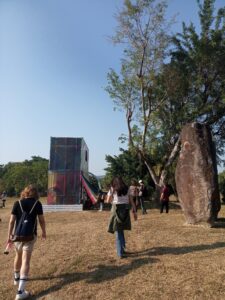 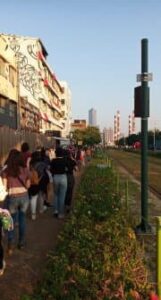 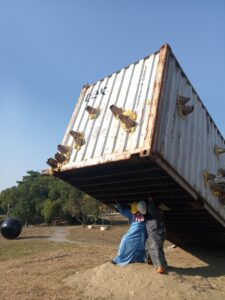 A dozen shipping containers, a reminder of the prosperity Kaohsiung Port once had, are used by the artists as the main element in their work for this international Festival, held for the very first time in 2001. Global affairs, human rights, capitalism, mass consumption, climate change and the Anthropocene, indigeneity and tribal issues, traditional and contemporary matters, and collective memory were some of the topics that artists chose to instigate an immersive experience. In the words of Andrea Sandoval, “the exhibition was entertaining”, even though she was expecting to see more containers. “The huge objects highlight Kaohsiung’s charm as a port area”.

Rodrigo Lopez Santos, who described himself as a “notorious pervert” and who was more specific about the artworks that especially grasped his attention, defined one of them, Honey trap, by saying that “the pink container encased in a candy wrapper is a perfect analogy for a well disguised trap, which is the one reason why one should never take candy from a stranger on a van.”

Apart from his appreciation, other students also showed a great interest in the analysis of the meanings and connotations involved in the rest of the containers. Students were gripped by some of the contemporary topics addressed by the artworks. A case in point was Wave sounds and voices. It pointed out difficult realities, such as illegal immigration and government persecution. “Trap” as a never-ending topic carries a diversity of ephemeral contexts. It depends on us to make a pause and reflect deeply on these situations. 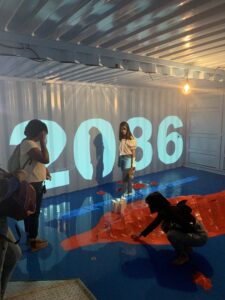 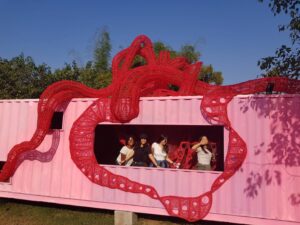 As a perfect spot to witness the sunset, the port of Kaohsiung was waiting for students to enjoy their last walk of the day. They got the chance to explore by their own the stalls around the port and get some food and drinks for their dinner. Students did not hesitate to take their phones and cameras to make memories of a pleasant afternoon that also brought them to the warehouses that were abandoned in the past, but now constitute an attractive spot for tourists since the inauguration of the Pier-2 Art Center.

To finish the day, and before spending the night at the Evergreen Lily Elementary School, whose edification was a positive consequence of Typhoon Morakot in August of 2009, students attended a dance performance called “A-HU 陷阱” (link ; link), held in the same installations of KMFA. The performance, included among the cultural initiatives promoted by the Indigenous Peoples Cultural Development Center, showcased the historical background of Taiwan as a territory conquered by the Japanese and Chinese, but at the same time featured the strong presence of the aboriginal ancestral legacy in their communities. With a clear narrative, A-HU also featured the internal conflicts that left some marks in Taiwanese identity. 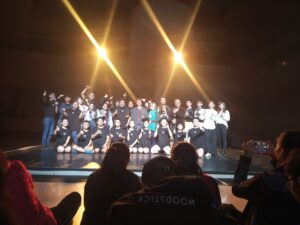 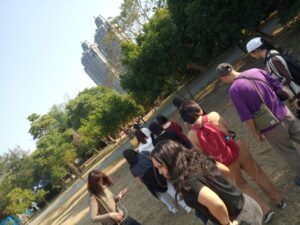 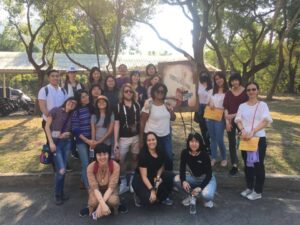